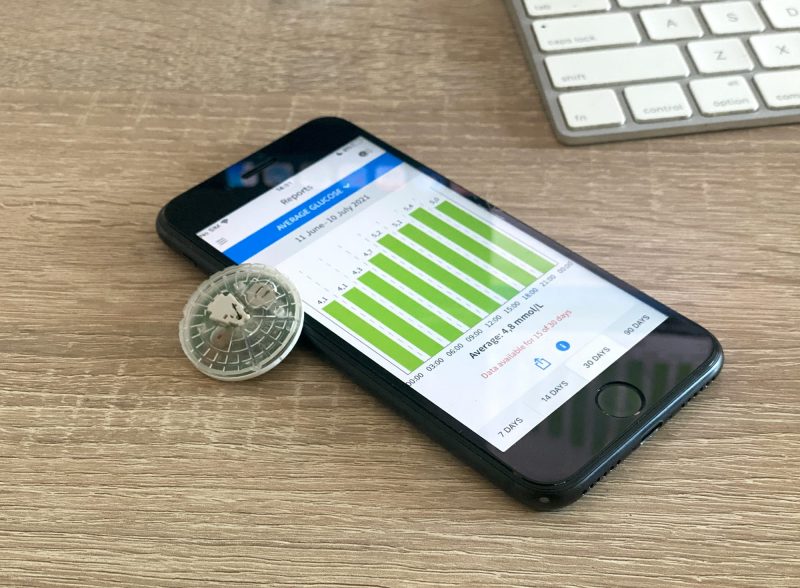 For the past 14 days, I’ve been wearing a continuous glucose monitor (CGM) while testing every possible food I normally do and don’t eat combined with different types of physical behavior.

I learned a lot and changed my already over-optimized diet as a result.

What is a CGM?

As the name suggests, it’s a system made of a sensor and a reader/smartphone app that continuously measures your blood sugar throughout the day and night.

It’s mostly used by diabetics, but with the recent rise of both, a number of startups promoting CGM use, and overall wellness awareness (pandemic silver lining), it has become rather popular among non-diabetics as well.

Why would non-diabetics use CGM?

As Dr. Peter Attia (@PeterAttiaMD) mentioned in his recent AMA episode, higher glucose variability and higher peak glucose levels are associated with accelerated onset of disease and death, even in non-diabetics. Studies show that higher glucose variability in non-diabetics is associated with an increased risk of cardiovascular and Alzheimer’s diseases, cardiovascular death, frailty, cancer death, and all-cause mortality compared to lower glucose variability. And CGM provides almost instant metabolic data so you can make changes in your diet and lifestyle to reduce the likelihood of a surprise diagnosis later in life.

Given my obsessions with health and data, I ordered the Abbot FreeStyle Libre CGM as soon as I got to a country that allowed me to do that without a doctor’s prescription. If you’re in the US, you can use Levels – they use the same Abbot device but pair it with their great app for more insight into your metabolic health.

The system is incredibly easy to use. Apply the sensor to the back of your arm (it doesn’t hurt, I promise), download the app (or buy a separate reader if your phone doesn’t have an NFC chip), pair them, wait a few hours for a sensor to calibrate (mine took almost 24 hours to calibrate properly, keep that in mind), and you’re good to go. Each sensor lasts only 14 days, so if you want to use it for recommended 28 days, you’d need to order two of them. 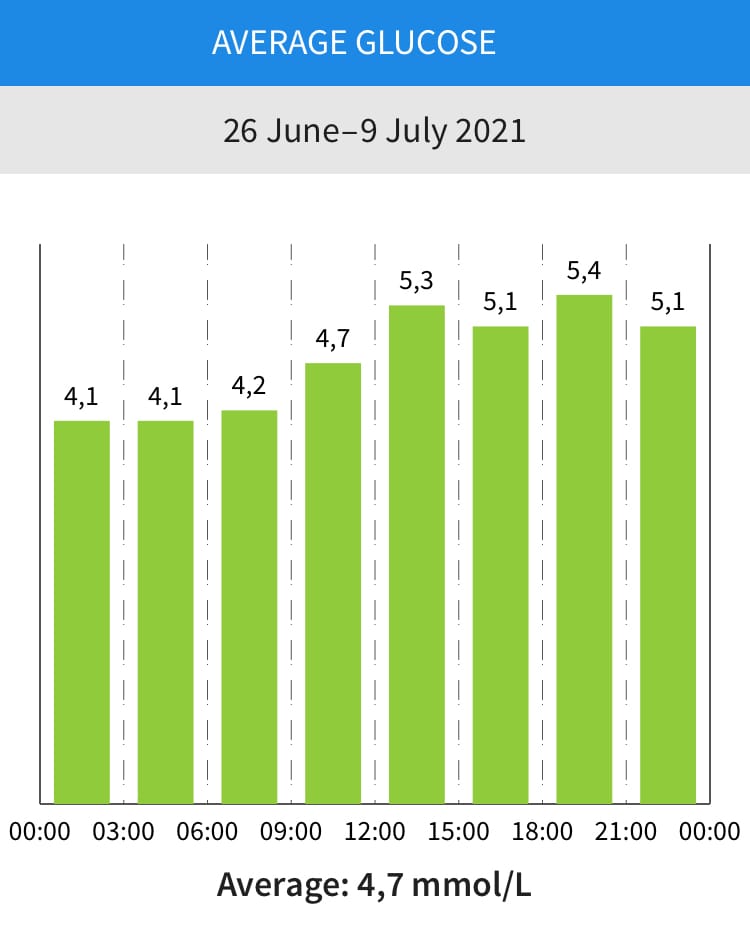 While staying in the target range 68% of the time, which isn’t too bad given that I intentionally experimented quite a lot. 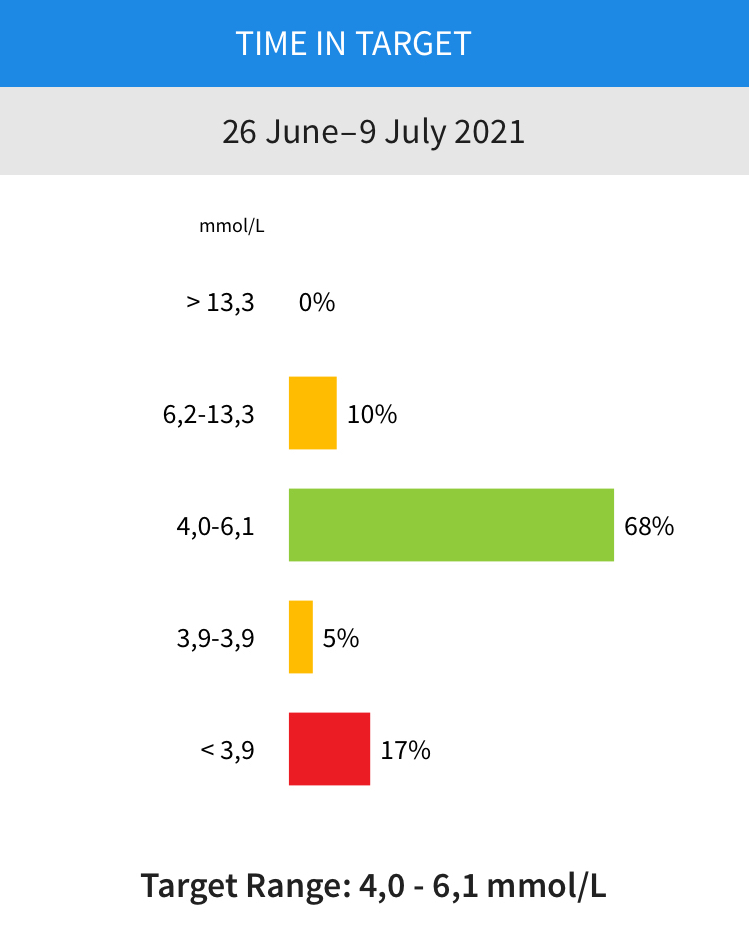 My estimated hemoglobin A1c was 4.6%, which is almost perfect.

I say “almost,” because based on this observational 2011 study that found a continuous increase in the associated risk for all-cause death throughout a broad range of hemoglobin A1c values, I’d prefer to keep my HbA1c below 4.5, even though based on the adjusted HRs and this study, anything below 5.0 seems to be good enough.

Over the course of these two weeks, I kept a journal where I documented most of the meals and glucose readings. 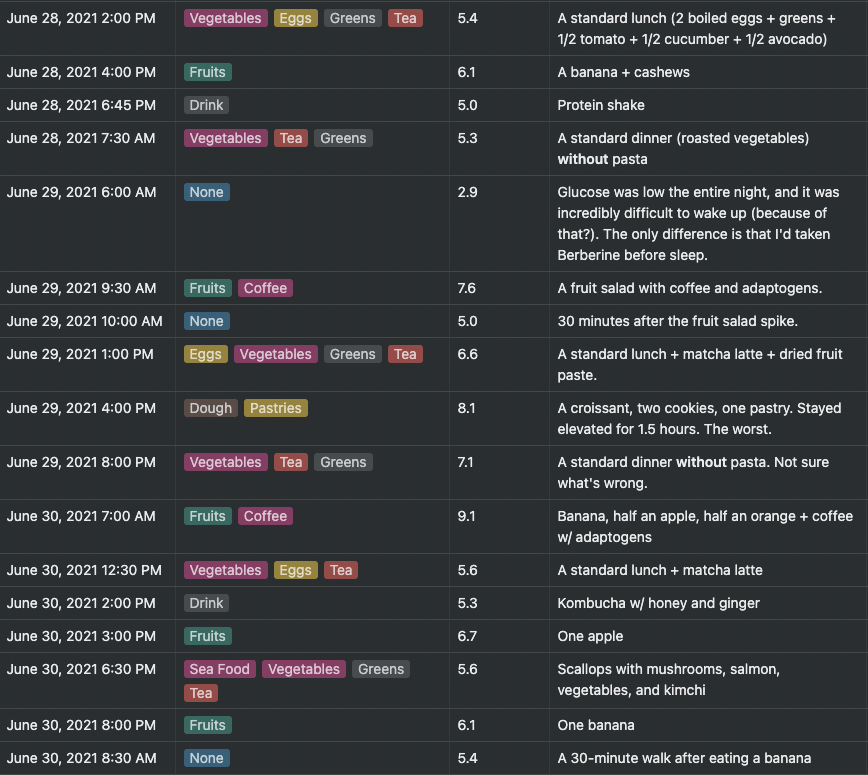 Some of the results were expected—yes, most foods with a high glycemic index will spike your glucose—but there were quite a few things that surprised me and changed my behavior as a result.

1. Not all fruits are the same.

I’ve heard lots of conflicting opinions about fruits. Even though I love fruits and never felt a sugar rush no matter how much I’d eat, it was interesting to see that some fruits which are considered to be the “good” ones would spike my blood sugar, but it would stay within the normal range after eating some other, supposedly the “bad” ones.

Fruits that spiked my glucose: cherries (8.4 mmol/L / 155 mg/dL after eating only 150g, even though its glycemic index is only 20), oranges, apples, strawberries, apricots, grapes.

Fruits that didn’t have as much effect, keeping my blood sugar within the normal range: bananas, pomegranate, raspberries, blueberries.

Behavioral change: eliminate all fruits that significantly elevate my glucose levels from my diet, keep eating the ones that don’t.

2. Almost any type of pasta is bad.

I’ve tested the wheat flour, rice, egg, and buckwheat pasta. The only one that didn’t spike the blood sugar as much was the soba made from buckwheat, which isn’t surprising given that it has the lowest glycemic index (56) of all.

Behavioral change: I used to have a side of pasta with my standard Mediterranean roasted vegetables at dinner, now I either have soba or don’t add it at all.

3. Rice has the worst effect on my blood sugar.

Yes, given its glycemic index of ~70, it shouldn’t surprise me as much, but no matter what type of other food I’ve tried during these two weeks—pastries, candies, pasta, cake—nothing could compare to what rice did to my glucose levels: it increased it to the record 10.7 mmol/L or 193 mg/dL! 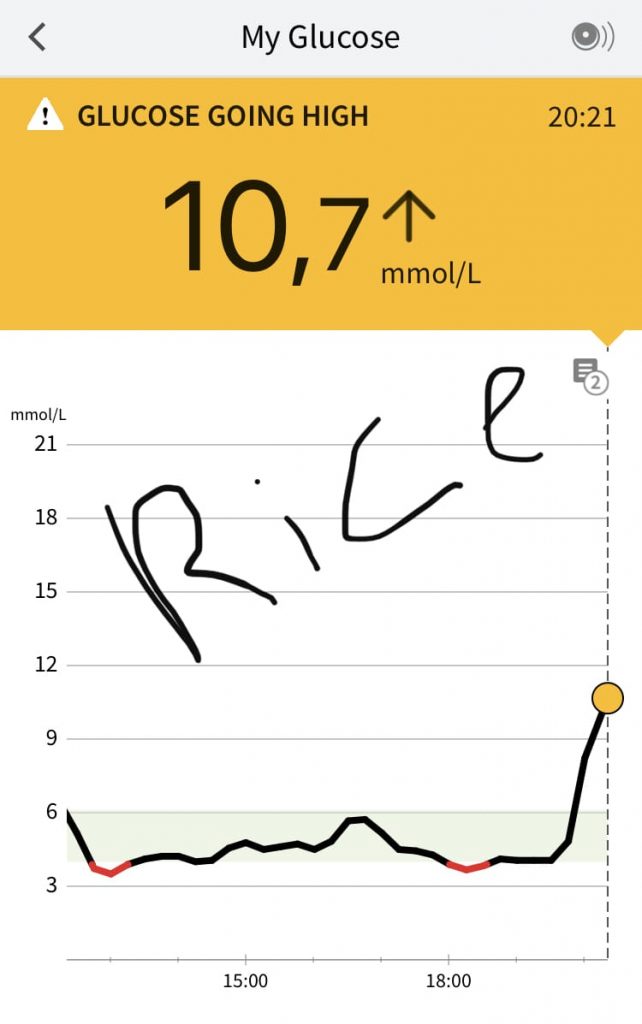 4. Wheat flour in any shape or form causes the longest blood sugar spikes.

For example, the glucose levels would go back to normal only 20 minutes after the 40% increase caused by cherries, but it’d stay up for 1.5 hours (!) after eating the wheat flour sugar-free pastry.

What about whole-grain foods? Unfortunately, there was no difference.

Behavioral change: I stopped eating bread roughly six years ago, but now I’ve also removed all other types of wheat flour foods, even the supposedly “healthy” salmon or vegetable wraps.

One interesting find was that a 30-minute walk could significantly lower both the peak and the duration of the blood sugar spike. It turns out that muscle contraction when you exercise is an effective mechanism that absorbs glucose without the corresponding rise in insulin. And you don’t have to exercise a lot to realize these benefits. As long as you aren’t completely sedentary after consuming some sugar, any movement helps.

Behavioral change: take a 30-minute walk after every meal.

Surprisingly, one of the most common recommendations, that consuming carbs (e.g., fruit) with protein, healthy fat, or both can bring down the glycemic index of the carbohydrate-rich food, and have a positive effect on blood sugar, didn’t work for me.

E.g., a single banana would raise my glucose levels to 6.1 mmol/L / 110 mg/dL, and pairing it with nuts (cashews, Brazil nuts, almonds) has had the same effect. Adding avocado, olive oil, and seeds to a single serving of whole-grain pasta also didn’t make any difference.

Here’s an interesting article and a study if you want to dig deeper into this.

7. Maintaining stable glucose levels during the night is very important.

I’ve had a few nights when my blood sugar would drop dangerously low – to 2.5 mmol/L or 45 mg/dL. As a result, my sleep quality was terrible, waking up was a challenge even after 8 hours of sleep, and I wouldn’t have enough energy during the day.

Why would I have hypoglycemia episodes at night?

The first reason was Berberine which I take used to take instead of Metformin on my workout days. I knew that Berberine lowers blood glucose but didn’t know that it does that so much to cause hypoglycemia.

The second reason was high-carb dinners. All nights with the lowest blood sugar, aside from the Berberine episodes, were the ones when I had rice, pasta, pizza, or any other high-carbohydrate meal for dinner.

These high-carb dinners caused my glucose levels to crash in the middle of the night – my body was going into emergency mode to wake me up.

Behavioral change: I stopped eating high-carb dinners and taking Berberine in the evening.

Continuous glucose monitor is simultaneously a behavioral and analytical tool that can track and uncover strategies and tactics which can save lots of time and money by preventing bad outcomes in the future.

Just like Oura Ring and Apple Watch changed my behavior towards sleep and fitness, drastically improving the quality of my life as a result, CGM has become a remarkable food consumption accountability tool and helped to even further optimize my diet and lifestyle during these two weeks.

Disclaimer: I’m not a doctor, nor do I play one on the internet, so everything in this article is a personal experience and not medical advice. Always do your own research and talk to your doctor before doing any health experiments.