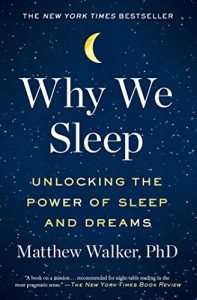 “Why We Sleep” has probably been one of the most important instruments to raise general awareness on the importance of sleep in recent years.

“Routinely sleeping less than six or seven hours a night demolishes your immune system, more than doubling your risk of cancer. Insufficient sleep is a key lifestyle factor determining whether or not you will develop Alzheimer’s disease. Inadequate sleep—even moderate reductions for just one week—disrupts blood sugar levels so profoundly that you would be classified as pre-diabetic. Short sleeping increases the likelihood of your coronary arteries becoming blocked and brittle, setting you on a path toward cardiovascular disease, stroke, and congestive heart failure. Fitting Charlotte Brontë’s prophetic wisdom that “a ruffled mind makes a restless pillow,” sleep disruption further contributes to all major psychiatric conditions, including depression, anxiety, and suicidality.”

“After being awake for nineteen hours, people who were sleep-deprived were as cognitively impaired as those who were legally drunk… After sixteen hours of being awake, the brain begins to fail. Humans need more than seven hours of sleep each night to maintain cognitive performance. After ten days of just seven hours of sleep, the brain is as dysfunctional as it would be after going without sleep for twenty-four hours.”

“Two-thirds of adults throughout all developed nations fail to obtain the recommended eight hours of nightly sleep.”

“When we compared the effectiveness of learning between the two groups, the result was clear: there was a 40 percent deficit in the ability of the sleep-deprived group to cram new facts into the brain (i.e., to make new memories), relative to the group that obtained a full night of sleep.”

“If you can only adhere to one of these each and every day, make it: going to bed and waking up at the same time of day no matter what.”

“Even a hint of dim light—8 to 10 lux—has been shown to delay the release of nighttime melatonin in humans. The feeblest of bedside lamps pumps out twice as much: anywhere from 20 to 80 lux. A subtly lit living room, where most people reside in the hours before bed, will hum at around 200 lux. Despite being just 1 to 2 percent of the strength of daylight, this ambient level of incandescent home lighting can have 50 percent of the melatonin-suppressing influence within the brain.”

“REM-sleep dreaming offers a form of overnight therapy. That is, REM-sleep dreaming takes the painful sting out of difficult, even traumatic, emotional episodes you have experienced during the day, offering emotional resolution when you awake the next morning.”

“Without sufficient sleep, amyloid plaques build up in the brain, especially in deep-sleep-generating regions, attacking and degrading them… getting too little sleep across the adult life span will significantly raise your risk of developing Alzheimer’s disease.”

“Your nocturnal melatonin levels are therefore controlled not only by the loss of daylight at dusk, but also the drop in temperature that coincides with the setting sun… A bedroom temperature of around 65 degrees Fahrenheit (18.3°C) is ideal for the sleep of most people, assuming standard bedding and clothing.”

“The need to dump heat from our extremities is also the reason that you may occasionally stick your hands and feet out from underneath the bedcovers at night due to your core becoming too hot, usually without your knowing.”

“When you get out of the bath, those dilated blood vessels on the surface quickly help radiate out inner heat, and your core body temperature plummets. Consequently, you fall asleep more quickly because your core is colder. Hot baths prior to bed can also induce 10 to 15 percent more deep NREM sleep in healthy adults.”

“Those who had their sleep laced with alcohol on the first night after learning suffered what can conservatively be described as partial amnesia seven days later, forgetting more than 50 percent of all that original knowledge.”

“After a thirty-hour shift without sleep, residents make a whopping 460 percent more diagnostic mistakes in the intensive care unit than when well-rested after enough sleep. Throughout the course of their residency, one in five medical residents will make a sleepless-related medical error that causes significant, liable harm to a patient. One in twenty residents will kill a patient due to a lack of sleep.”