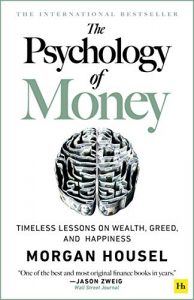 A genius who loses control of their emotions can be a financial disaster, while ordinary people with no financial education can be wealthy if they have a handful of behavioral skills that have nothing to do with formal measures of intelligence.

It’s short—only 19 straight to the point chapters—but very enjoyable read with lots of stories and examples illustrating just how weird and complicated our relationships with money are, and practical advice to make it easier.

“A genius is the man who can do the average thing when everyone else around him is losing his mind.” —Napoleon

“The world is full of obvious things which nobody by any chance ever observes.” —Sherlock Holmes

The premise of this book is that doing well with money has a little to do with how smart you are and a lot to do with how you behave. And behavior is hard to teach, even to really smart people. A genius who loses control of their emotions can be a financial disaster.

Ordinary folks with no financial education can be wealthy if they have a handful of behavioral skills that have nothing to do with formal measures of intelligence.

financial outcomes are driven by luck, independent of intelligence and effort.

financial success is not a hard science. It’s a soft skill, where how you behave is more important than what you know.

I love Voltaire’s observation that “History never repeats itself; man always does.” It applies so well to how we behave with money.

You go through life with different beliefs, goals, and forecasts, than I do. That’s not because one of us is smarter than the other, or has better information. It’s because we’ve had different lives shaped by different and equally persuasive experiences.

Your personal experiences with money make up maybe 0.00000001% of what’s happened in the world, but maybe 80% of how you think the world works.

The challenge for us is that no amount of studying or open-mindedness can genuinely recreate the power of fear and uncertainty.

I can read about what it was like to lose everything during the Great Depression. But I don’t have the emotional scars of those who actually experienced it. And the person who lived through it can’t fathom why someone like me could come across as complacent about things like owning stocks. We see the world through a different lens.

We all think we know how the world works. But we’ve all only experienced a tiny sliver of it. As investor Michael Batnick says, “some lessons have to be experienced before they can be understood.” We are all victims, in different ways, to that truth.

every financial decision a person makes makes sense to them at that moment and checks the boxes they need to check. They tell themselves a story about what they’re doing and why they’re doing it, and that story has been shaped by their own unique experiences.

Few people make financial decisions purely with a spreadsheet. They make them at the dinner table, or in a company meeting. Places where personal history, your own unique view of the world, ego, pride, marketing, and odd incentives are scrambled together into a narrative that works for you.

The 401(k)—the backbone savings vehicle of American retirement—did not exist until 1978. The Roth IRA was not born until 1998. If it were a person it would be barely old enough to drink.

The share of Americans over age 25 with a bachelor’s degree has gone from less than 1 in 20 in 1940 to 1 in 4 by 2015.7 The average college tuition over that time rose more than fourfold adjusted for inflation.8 Something so big and so important hitting society so fast explains why, for example, so many people have made poor decisions with student loans over the last 20 years.

Dogs were domesticated 10,000 years ago and still retain some behaviors of their wild ancestors. Yet here we are, with between 20 and 50 years of experience in the modern financial system, hoping to be perfectly acclimated.

Say I buy a stock, and five years later it’s gone nowhere. It’s possible that I made a bad decision by buying it in the first place. It’s also possible that I made a good decision that had an 80% chance of making money, and I just happened to end up on the side of the unfortunate 20%. How do I know which is which? Did I make a mistake, or did I just experience the reality of risk?

Cornelius Vanderbilt had just finished a series of business deals to expand his railroad empire. One of his business advisors leaned in to tell Vanderbilt that every transaction he agreed to broke the law. “My God, John,” said Vanderbilt, “You don’t suppose you can run a railroad in accordance with the statutes of the State of New York, do you?”

The line between “inspiringly bold” and “foolishly reckless” can be a millimeter thick and only visible with hindsight.

realize that not all success is due to hard work, and not all poverty is due to laziness. Keep this in mind when judging people, including yourself. Therefore, focus less on specific individuals and case studies and more on broad patterns.

You’ll get closer to actionable takeaways by looking for broad patterns of success and failure. The more common the pattern, the more applicable it might be to your life.

Trying to emulate Warren Buffett’s investment success is hard, because his results are so extreme that the role of luck in his lifetime performance is very likely high, and luck isn’t something you can reliably emulate. But realizing, as we’ll see in chapter 7, that people who have control over their time tend to be happier in life is a broad and common enough observation that you can do something with it.

Bill Gates once said, “Success is a lousy teacher. It seduces smart people into thinking they can’t lose.”

When things are going extremely well, realize it’s not as good as you think. You are not invincible, and if you acknowledge that luck brought you success then you have to believe in luck’s cousin, risk, which can turn your story around just as quickly.

Failure can be a lousy teacher, because it seduces smart people into thinking their decisions were terrible when sometimes they just reflect the unforgiving realities of risk.

The trick when dealing with failure is arranging your financial life in a way that a bad investment here and a missed financial goal there won’t wipe you out so you can keep playing until the odds fall in your favor.

The hardest financial skill is getting the goalpost to stop moving.

Modern capitalism is a pro at two things: generating wealth and generating envy. Perhaps they go hand in hand; wanting to surpass your peers can be the fuel of hard work. But life isn’t any fun without a sense of enough. Happiness, as it’s said, is just results minus expectations.

Consider a little thought experiment. Buffett began serious investing when he was 10 years old. By the time he was 30 he had a net worth of $1 million, or $9.3 million adjusted for inflation.16 What if he was a more normal person, spending his teens and 20s exploring the world and finding his passion, and by age 30 his net worth was, say, $25,000? And let’s say he still went on to earn the extraordinary annual investment returns he’s been able to generate (22% annually), but quit investing and retired at age 60 to play golf and spend time with his grandkids. What would a rough estimate of his net worth be today? Not $84.5 billion. $11.9 million. 99.9% less than his actual net worth.

There are a million ways to get wealthy, and plenty of books on how to do so. But there’s only one way to stay wealthy: some combination of frugality and paranoia.

Getting money is one thing. Keeping it is another. If I had to summarize money success in a single word it would be “survival.”

We assume that tomorrow won’t be like yesterday. We can’t afford to rest on our laurels. We can’t be complacent. We can’t assume that yesterday’s success translates into tomorrow’s good fortune.

Compounding only works if you can give an asset years and years to grow. It’s like planting oak trees: A year of growth will never show much progress, 10 years can make a meaningful difference, and 50 years can create something absolutely extraordinary.

We can spend years trying to figure out how Buffett achieved his investment returns: how he found the best companies, the cheapest stocks, the best managers. That’s hard. Less hard but equally important is pointing out what he didn’t do. He didn’t get carried away with debt. He didn’t panic and sell during the 14 recessions he’s lived through. He didn’t sully his business reputation. He didn’t attach himself to one strategy, one world view, or one passing trend. He didn’t rely on others’ money (managing investments through a public company meant investors couldn’t withdraw their capital). He didn’t burn himself out and quit or retire. He survived. Survival gave him longevity. And longevity—investing consistently from age 10 to at least age 89—is what made compounding work wonders. That single point is what matters most when describing his success.

Applying the survival mindset to the real world comes down to appreciating three things. 1. More than I want big returns, I want to be financially unbreakable. And if I’m unbreakable I actually think I’ll get the biggest returns, because I’ll be able to stick around long enough for compounding to work wonders.

Planning is important, but the most important part of every plan is to plan on the plan not going according to plan.