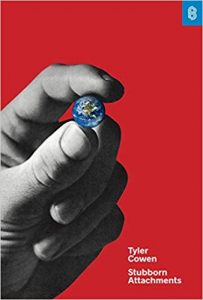 This book is packed with big ideas and questions, interesting thought experiments, and fascinating theories. It represents the best of multi-disciplinary thinking and has something for everyone. Cowen delves into economics, philosophy, philanthropy, sociology, geopolitics, history, and even pop culture.

“If we are building principles for politics, we need approaches which are relatively fortified against human error and the rampant human tendency for self-deception, and which can transcend our own tendencies for excessive “us vs. them” thinking.”

“In short, my philosophical starting points are: “Right” and “wrong” are very real concepts which should possess great force. We should be skeptical about the powers of the individual human mind. Human life is complex and offers many different goods, not just one value that trumps all others.”

“First, I do not take the productive powers of economies for granted. Production could be much greater than it is today, and our lives could be more splendid. Or, if we make some big mistakes, production could be much lower, and we could all be much poorer. This simple observation allows us to put the idea of production at the center of our moral theory, because without production, value is problematic.”

“It is the work of capital, labor, and natural resources, driven by the creative individual mind, which undergird the achievements of our civilization. Whether or not you agree with all of Rand’s political views, she is correct in her stance that we must not take the existence of wealth for granted.”

“I do not argue by elimination by focusing on the weaknesses of other views and downplaying the weaknesses of my own. Instead, I seek to start with the tough questions, pinpoint the hardest points of dispute, and spend the rest of my time trying to pick up the pieces. That is what I like to read, and therefore it is what I’m trying to write.”

“So, in a social setting, what might count as analogous to a Crusonia plant? Look for social processes which are ongoing, self-sustaining, and which create rising value over time. The natural candidate for such a process is economic growth, or some modified version of that concept.”

“Wealth Plus: The total amount of value produced over a certain time period. This includes the traditional measures of economic value found in GDP statistics, but also includes measures of leisure time, household production, and environmental amenities, as summed up in a relevant measure of wealth.”

“Maximizing Wealth Plus does not mean that everyone should work as much as possible. A fourteen-hour work day might maximize measured GDP in the short run, but it would be less propitious over time once we take into account the value of leisure, not to mention the potential for burnout. Still, this standard is going to value a strong work ethic.”

“The principle of Wealth Plus holds that we should maintain higher growth over time, and not just for a single year or for some other, shorter period of time. Maximizing the sustainable rate of economic growth does not mean pursuing immediate growth at the expense of all other values.”

“Michael Shermer has compiled an informal database on civilizational survival that catalogues sixty civilizations, including Sumeria, Mesopotamia, Babylonia, the eight dynasties of Egypt, six civilizations in Greece, the Roman Republic and Empire, various dynasties and republics of China, four periods in Africa, three in India, two in Japan, six in Central and South America, and six in modern Europe and America. He finds that the average civilization endured for 402.6 years. He also finds that decline comes more rapidly over time; since the collapse of the Roman Empire, the average duration of a civilization has been only 304.5 years.”

“Some of the longer-lived civilizations include Egypt (2,820 years), China (2,133 years), and the Byzantine Empire (1,962 years). The Venetian Republic lasted 1,112 years. The shorter examples include the Achaemenid Persian Empire (220 years) and the Sassanian Persian Empire (427 years).”

“Economist Russ Roberts reports that he frequently polls journalists about how much economic growth there has been since the year 1900. According to Russ, the typical response is that the standard of living has gone up by around fifty percent. In reality, the U.S. standard of living has increased by a factor of five to seven, estimated conservatively, and possibly much more, depending on how we measure prices and the values of outputs over time, a highly inexact science.”

“In 1900, for instance, almost half of all U.S. households (forty-nine percent) had more than one occupant per room and almost one quarter (twenty-three percent) had over 3.5 persons per sleeping room. Slightly less than one quarter (twenty-four percent) of all U.S. households had running water, eighteen percent had refrigerators, and twelve percent had gas or electric lighting. Today, the figures for all of these stand at ninety-nine percent or higher.”

“As recently as the end of the nineteenth century, life expectancy in Western Europe was roughly forty years of age, and food took up fifty to seventy-five percent of a typical family budget. The typical diet in eighteenth-century France had about the same energy value as that of Rwanda in 1965, the most malnourished nation for that year. One effect of this deprivation was that most people simply did not have much energy for life.”

“The very existence of an advanced civilization—the product of cumulative economic growth—confers immense benefits to ordinary citizens, including their ability to educate and entertain themselves and choose one life path over another. For further arguments along these lines, I recommend Steven Pinker’s recent book, Enlightenment Now: The Case for Reason, Science, Humanism, and Progress.”

“The distribution of wealth changes over time, and not all growth trickles down, but as an overall historical average, the bottom quintile of an economy shares in growth.”

“One study predicts that if the leading twenty-one industrial countries were to boost their R&D by half a percentage point of GDP, U.S. output alone would grow by fifteen percent. But it doesn’t end there: output in Canada and Italy would grow by about twenty-five percent, and the output of all industrial nations would increase by 17.5 percent, on average. In the less economically developed countries, output would increase by about 10.6 percent on average.”

“Nobel Laureate Amartya Sen has promoted the idea of “capabilities” as, if not quite a substitute for economic growth, then an alternative focus. Sen points out that our positive opportunities in life often matter more than the amount of cash in our bank accounts. He also notes that some parts of the world, such as the state of Kerala in India, have relatively good health and education indicators, even though their per capita incomes are relatively low.”

“For instance, a two percent rate of economic growth, as opposed to a one percent rate, makes only a small difference across the time horizon of a single year. But as time passes, the higher growth rate eventually brings about a very large boost to well-being. To make this concrete, here’s an experiment: redo U.S. history, but assume the country’s economy had grown one percentage point less each year between 1870 and 1990. In that scenario, the United States of 1990 would be no richer than the Mexico of 1990.”

“Recent research suggests that wealth boosts happiness and that this holds true for a great variety of people, including for the relatively wealthy, who are already meeting their basic needs.”

“Kenyans have recalibrated their use of language to reflect what they can reasonably expect from their daily experiences. In similar fashion, people in less happy situations or less happy societies often attach less ambitious meanings to the claim that they are happy.”

“A fast-food cheeseburger is not actually worth $4.89, considering its potential impact on my future health. The cheeseburger offer is manipulating my evolutionarily programmed desire for more fat, to the detriment of my life expectancy.”

“The wealthier society will, over time, make just about everyone much better off.”

“The Principle of Growth: We should maximize the rate of sustainable economic growth, defined in terms of a concept such as Wealth Plus.

The Principle of Growth Plus Rights: Inviolable human rights, where applicable, should constrain the quest for higher economic growth.”

“So often we are tempted to put pleasure first and postpone our chores and our pains. The present is so real and vivid, and the future seems so distant and abstract. Many people cannot fully grasp that when the future comes, it will be as real as the present is right now.”

“We may have an innate biological preference for the “now,” but we will do better if we can get past it, if we can tap into the part of ourselves that recognizes that a benefit in twenty years’ time is about as valuable as that same benefit in thirty years’ time.”

“Economists and other social scientists often speak of a “discount rate.” A discount rate tells us how to compare future benefits to current benefits (or costs) when we make decisions. When the discount rate is high, we are counting future costs and benefits for less.”

“A higher growth rate means that the future, at some point in time, will be much richer than it would be otherwise, and, as I argued earlier, it also means that human beings will be much better off. How compelled should we feel to bring about this wealthier state of affairs? If you only care about today, you won’t be as motivated to act in favor of higher sustainable growth.”

“The lack—and, indeed, the sometimes conscious rejection—of the notion of faith, as is common in secular rationalism, is one of the most troubling features of the contemporary world. It has brought us some very real gains in terms of personal freedom, but it also threatens to diminish our ability to make the very best choices.”