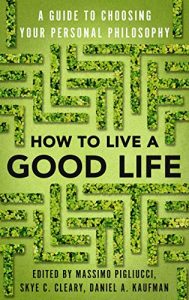 This book is a collection of essays by fifteen philosophers presenting an introductory guide to choosing a philosophy for living an examined and meaningful life.

Each author is explaining their philosophical view on life: from ancient Eastern approaches such as Buddhism, Confucianism, Hinduism, and Daoism to Western ones such as Aristotelianism, Epicureanism, and Stoicism; from venerable religious traditions such as Judaism, Christianity, and Islam to modern ones such as Ethical Culture, existentialism, effective altruism, pragmatism, and secular humanism.

My current personal philosophy is a mix of Stoicism, Daoism, and Confucianism (most of the time, I’m not satisfied with existing solutions, ending up mixing and matching the parts that resonate the most), and I believe this book can help you to finds yours.

Do you have some idea, however vague, of how the world works? Do you have a sense of how to properly behave toward others? If you answered yes to both questions, congratulations, you have a philosophy of life!

A philosophy of life is a framework that is made, at a minimum, of metaphysics (i.e., an account of how the world works) and ethics (i.e., a set of principles or guidelines to deploy when interacting with others). The real question, then, is not whether you have a philosophy of life, but rather if it stands up to scrutiny. That is, whether or not it’s a good philosophy of life.

Philosophy, as you probably know, literally means “love of wisdom.”

Buddhism, Confucianism, and Daoism are philosophies of life that present primarily practical guides for ethical behavior.

Buddhism is, by some estimates, currently the fourth largest “religion” in the world, after Christianity, Islam, and Hinduism, accounting for around 500 million people, or nearly 7 percent of the world’s population.

Siddhartha Gautama, more commonly known as “the Buddha,” was an Indian prince who lived around 500–400 BCE. At the age of twenty-nine, he traveled away from his palace to meet his subjects and was shocked by the sickness and suffering he witnessed. He became an ascetic and at thirty-five meditated under a bodhi tree for forty-nine days and, according to the legend, became enlightened.

Buddhists check, or as Flanagan puts it, “deflate” their ego by exercising virtues including compassion, loving-kindness, sympathetic joy, and equanimity.

The Confucian way is to treat everyone as if they were our own siblings, parents, or children because we exist within relationships, and good relationships make for a good life.

Buddhism sees attachments as the source of suffering, while Confucianism argues that a good life is one rich in healthy attachments, to family, friends, and humans in general.

For the Buddhists, we are impermanent and without a fixed essence. A Confucian says that to deny the fact of individual existence, “is like closing one’s eyes so that one does not see one’s nose—but the nose is still there where it belongs.”

Whereas Confucianism is concerned with social harmony, Daoism is interested in the individual living in harmony with nature and the natural flow of the universe.

Happiness comes not from nirvana or relationships necessarily, but rather from trusting and following the flow.

Seneca, like other Stoics, thought that we confuse the occasional necessity of severe punishment and war with the necessity of anger.

The ethical imperative is always to love, to substitute compassion and love whenever and wherever there is suffering, violence, cruelty, and hate.

The Buddha’s last words were “Everything is impermanent. Strive on with awareness.”

Meditation on breath, bodily posture, and the stream of consciousness assists in understanding impermanence and no-self experientiality, as well as honing attentional skill and self-regulation. My breaths, my aches and pains, my worries, desires, obsessions, and anxieties come and go. None of them define me. Nothing in experience stays the same. I see no abiding self. But I do see that I—perhaps we should say “i”—go on without any of these desires, anxieties, obsessions defining me. This might help break the grip of the idea that I am the most important thing in the universe, and in the case of weird or unhealthy identifications, it might help me see that I am not defined by those identifications.

Most meditation in North America and Europe, which advertises itself as Buddhist or Buddhist-inspired, is served up as a tool for becoming less frazzled and more serene. It is about the self, not about being less selfish.

The original Buddhism focused on dukkha, the problem of alleviating suffering for all sentient beings, including oneself.

What Buddhism might offer is a relatively stable sense of serenity and contentment, not the sort of feeling state that is widely sought and promoted in the West as the best kind of happiness. This serene and contented state comes, if it does, from the wisdom of impermanence and no-self, from mindfulness, and from enacting the virtues of compassion, loving-kindness, sympathetic joy, and equanimity.

Followers of Confucius (551–479 BCE) answer that a good life is one characterized by loving relationships with other humans. The paradigm of loving relationships is provided by the ideal family, in which parents guide and nurture children, and siblings care for one another.

The two most important Confucian virtues are benevolence and righteousness.

Benevolence is the virtue manifested in our compassion for others: it is expressed in the love you have for your parents, the feeling of alarm you have when you see a child about to fall into a well, your pity for a suffering animal, and even the visceral satisfaction you feel in contemplating plants, trees, and mountains in their natural state. Since we are all interdependent, our benevolence should extend to “all under Heaven.”

Confucians hold that we should show compassion to all human beings, but we have special obligations to certain individuals because of the specific relationships we have with them, relationships that make us who we are—family, community, and friendship. So part of the justification for differentiated care is the special debts we acquire through the relationships that help define us.

While benevolence is important, we should not completely dissolve into other people and things, because we are also individuals with our own distinct identity.

Wisdom is manifested in things like being a good judge of the character of others, having a prudent concern for one’s own well-being, having the ability to work well with others (whether as a leader, follower, or colleague), and having a practical sense of how to get things done in the real world.

The fourth cardinal virtue of the Confucian tradition is propriety. Propriety is manifested in our mastery of etiquette and ritual. These are merely social conventions, and propriety is the least important of the cardinal virtues. It is much better to be a kind person of integrity who is a bit of a social clod than a graceful villain.