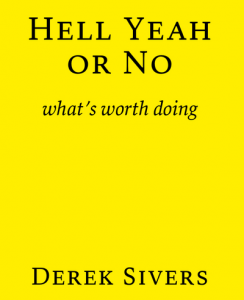 This is one of those extremely rare books with zero fluff and full of great points that you want to highlight entire chapters of.

Some of my favorite chapters (on parenting/excitement in finding things/what matters most) need to be read in full, so I highly recommend you to read the entire book (it’s a very short book, and can be completed in less than 2 hours).

“No matter what you tell the world or tell yourself, your actions reveal your real values. Your actions show you what you actually want.”

“You need to know why you’re doing what you’re doing. Use it as your compass and optimize your life around it. Let the other goals be secondary so that when those decision moments come, you can choose the value that you already know matters most to you.”

“Many things we think are true are really just our local culture. We can’t see it until we get outside of it.”

“Refuse almost everything. Do almost nothing. But the things you do, do them all the way.”

“Your first reaction is usually outdated. Either it’s an answer you came up with long ago and now use instead of thinking, or it’s a knee-jerk emotional response to something in your past.”

“Before you start something, think of the ways it could end. Sometimes the smart choice is to say no to the whole game.”

“Raise standards. Say no to anything less than great.”

“The standard pace is for chumps. The system is designed so anyone can keep up. If you’re more driven than most people, you can do way more than anyone expects. And this principle applies to all of life, not just school.”

“Silence is a great canvas for your thoughts. That vacuum helps turn all of your inputs into output. That lack of interruption helps you flow.”

“People often ask me what they can do to be more successful. I say disconnect. Even if just for a few hours. Unplug. Turn off your phone and Wi-Fi. Focus. Write. Practice. Create. That’s what’s rare and valuable these days.”

“It’s so important to separate the real goal from the old mental associations. We have old dreams. We have images we want to re-create. They’re hard to untangle from the result we really want. They become excuses, and reasons to procrastinate.”

“Asking advice should be like echolocation. Bounce ideas off of all of your surroundings, and listen to all the echoes to get the whole picture. Only you know what to do, based on all the feedback you’ve received and all your personal nuances that no one else knows.”

“If you’re thirty now and have six different directions you want to pursue, then you can do each one for ten years, and have done all of them by the time you’re ninety.”

“To assume you’re below average is to admit you’re still learning. You focus on what you need to improve, not your past accomplishments.”

“What do you hate not doing? What makes you feel depressed, annoyed, or like your life has gone astray if you don’t do it enough? Answers to these double-negative questions seem to be better indicators of what’s really worth doing.”

“Life can be improved by adding, or by subtracting. The world pushes us to add because that benefits them. But the secret is to focus on subtracting.”

“The most successful people I know have a narrow focus, protect themselves against time-wasters, say no to almost everything, and have let go of old limiting beliefs.”

“Judge a goal by how well it changes your actions in the present moment. A bad goal makes you say, “I want to do that someday.” A great goal makes you take action immediately.”

“If you keep thinking about doing something big, and you find that the idea both terrifies and intrigues you, it’s probably a worthy endeavor for you.”

“Legendary psychologist Abraham Maslow said it well: “Life is an ongoing process of choosing between safety (out of fear and need for defense) and risk (for the sake of progress and growth). Make the growth choice a dozen times a day.”

“Whatever scares you, go do it.”