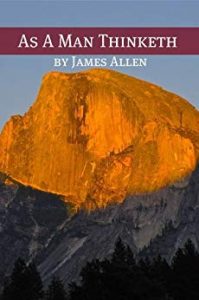 Your internal environment creates your external reality. Your thoughts and beliefs create the world around you. This is true in all of life, and this short book that you can read in less than an hour is a great reminder of just how important your thoughts are. Everything starts with a thought, and therefore if you want to improve any area of your life, you should start with your thoughts and beliefs. Thoughts are like seeds – if you plant beautiful seeds, beautiful things will grow, and vice versa.

“Man is buffeted by circumstances so long as he believes himself to be the creature of outside conditions, but when he realizes that he is a creative power, and that he may command the hidden soil and seeds of his being out of which circumstances grow; he then becomes the rightful master of himself.”

“Change of diet will not help a man who will not change his thoughts. When a man makes his thoughts pure, he no longer desires impure food.”

“The soul attracts that which it secretly harbors; that which it loves, and also that which it fears; it reaches the height of its cherished aspirations; it falls to the level of its unchastened desires and circumstances are the means by which the soul receives it own.”

“A man is literally what he thinks, his character being the complete sum of all his thoughts. As the plant springs from, and could not be without, the seed, so every act of man springs from the hidden seeds of thought, and could not have appeared without them.”

“Men imagine that thought can be kept secret, but it cannot. It rapidly crystallizes into habit, and habit solidifies into circumstance.”

“Act is the blossom of thought, and joy and suffering are its fruit; thus does a man garner in the sweet and bitter fruitage of his own husbandry.”

“A noble and God-like character is not a thing of favor or chance, but is the natural result of continued effort in right thinking, the effect of long-cherished association with God-like thoughts.”

“Man is made or unmade by himself. In the armory of thought he forges the weapons by which he destroys himself.”

“Man is always the master, even in his weakest and most abandoned state. But in his weakness and degradation he is a foolish master who misgoverns his “household.”

“That he is the maker of his character, the molder of his life, and the builder of his destiny, he may unerringly prove, if he will watch, control, and alter his thoughts, tracing their effects upon himself, upon others and upon his life and circumstances, linking cause and effect by patient practice and investigation. And utilizing his every experience, even the most trivial, everyday occurrence, as a means of obtaining that knowledge of himself which is understanding, wisdom, power.”

“If no useful seeds are put into mind, then an abundance of useless weed-seeds will fall therein, and will continue to produce their kind.”

“The outer conditions of a person’s life will always be found to be harmoniously related to his inner state.”

“Every man is where he is by the law of his being; the thoughts which he has built into his character have brought him there, and in the arrangement of his life there is no element of chance, but all is the result of a law which cannot err.”

“Circumstance does not make the man; it reveals him to himself.”

“Men do not attract that which they want, but that which they are. Their whims, fancies, and ambitions are thwarted at every step, but their inmost thoughts and desires are fed with their own food, be it foul or clean. Man is manacled only by himself; thought and action are the jailors of Fate—they imprison, being base; they are also the angels of Freedom—they liberate, being noble. Not what he wished and prays for does a man get, but what he justly earns. His wishes and prayers are only gratified and answered when they harmonize with his thoughts and actions.”

“Suffering is always the effect of wrong thought in some direction. It is an indication that the individual is out of harmony with himself, with the law of his being.”

“The world is your kaleidoscope, and the varying combinations of colors which at every succeeding moment it presents to you are the exquisitely adjusted pictures of your ever-moving thoughts.”

“The people who live in fear of disease are the people who get it. Anxiety quickly demoralizes the whole body, and lays it open to the entrance of disease; while impure thoughts, even if not physically indulged, will sooner shatter the nervous system.”

“Out of a clean heart comes a clean life and a clean body.”

“Thought is the fount of action, life and manifestation; make the fountain pure, and all will be pure.”

“A sour face does not come by chance; it is made by sour thoughts. Wrinkles that mar are drawn by folly, passion, pride.”

“Until thought is linked with purpose there is no intelligent accomplishment.”

“They who have no central purpose in their life fall an easy prey to petty worries, fears, troubles, and self-pityings, all of which are indications of weakness, which lead, just as surely as deliberately planned sins (though by a diff route), to failure, unhappiness, and loss, for weakness cannot persist in a power-evolving universe.”

“As the physically weak man can make himself strong by careful and patient training, so the man of weak thoughts can make them strong by exercising himself in right thinking.”